The new addition to my Ogre's Kingdoms collection is this Standard Bearer for my Irongut unit. I wanted a clean polished set of Gutplate and weapons, something different from the rest of the Gang with the rusty armament. All and all five more models to finish the Ogre's Battalion. 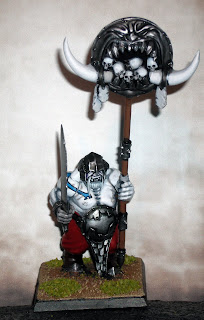 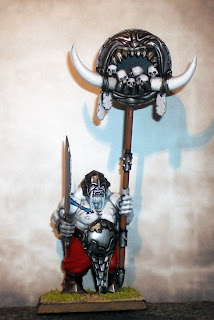 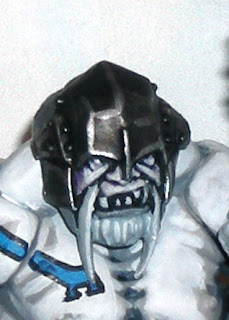 The Angels Sanguine project took me a lot of attention and time. I don't complain. I took a small brake to paint 2 more models from the Assault on Black Reach to finish the combat squad. So, here's the last Salamanders and a squad picture of all 2nd Tactical ''Lava's Wrath''.All models are based and with Decals. 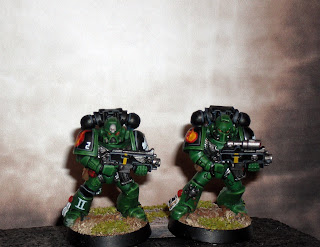 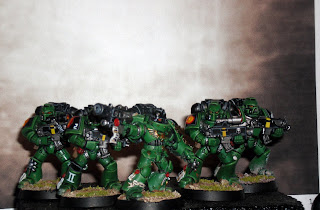 Another model for the Vanguard Veteran Squad, this time from the Veteran Squad Mk2 box. I really love these models and I plan to paint a 10man squad if I will be lucky enough to find them. So, if you happen to find any of those inside your spare box and you wish to sell, trade or gift please drop me a message. Thank you everyone! 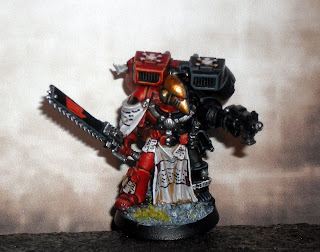 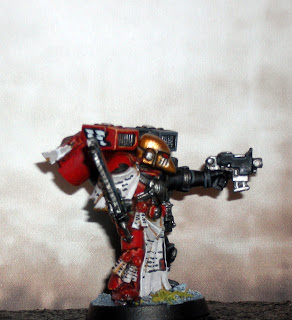 I am looking for models from the Veteran Mk.1 and Mk.2 boxed sets.I already got the fifth model from the Mk1. Box. 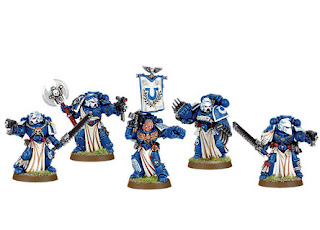 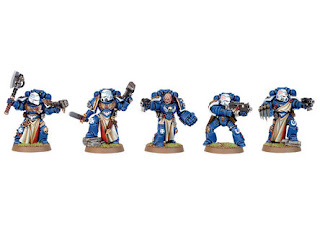 A Librarian Dreadnought is one more model exclusive to the Blood Angels and friends roster. A really nice model sporting both a Psychic Hood and a Force Weapon as well as a healthy thick ceramite armour of 13 and the ability to cast ''Shield of Sanguinius'' or ''Blood Lance'' or even fly 12'' toward the foe. It's just too good to miss!
The stricking blue colour of the armour is a really nice addition to the red/black fighting vehicles an Angels Sanguine force has, but where's the catch? What is the huge draw back? Well, it's not exactly a draw back in itself if you ask me. The Elites Section of the Blood Angels Codex is full with cool entries like Assault Terminators, Furioso Dreadnought, Sternguard Veterans... Nevertheless if you are looking for something unlike any other Dreadnought out there the Librarian is a nice addition gamewise to your force and an excellent centerpiece if Storm Raven and Land Raiders are to bulky for your tastes. 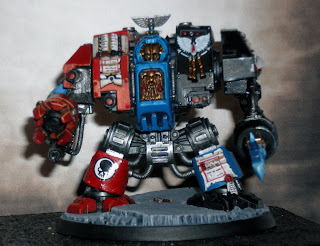 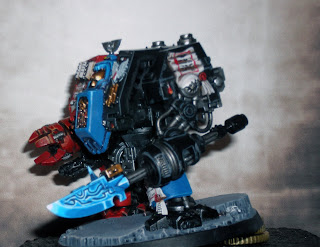 Thanks for watching.
Posted by Kyr Gkikas at 20:40 4 comments:

Another Irongut is added to the Ogre collection and I say collection because it is not yet an army but it goes slowly to this level. I've got no idea what pushed me onward to paint these "kings of ugliness" but who cares? I had fun painting them and this says something! 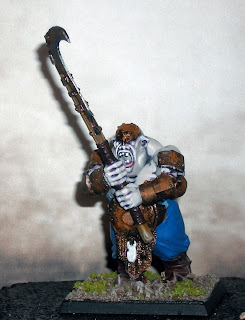 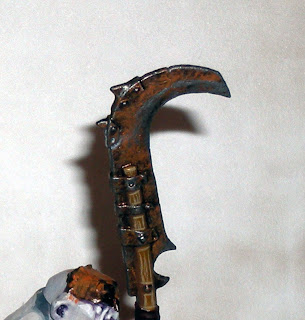 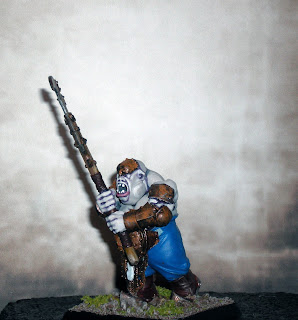 While I paint a Bike squad I also put on my paintstation a Vanguard Veteran. I plan to arm these Astartes with a mix of exotic and standard issue weaponry, thus to be able to field different Veteran Sergeants or my Assault or Tactical Squads or if the need arises to field a Vanguard Veteran Squad.
This model is from the Vanguard Veterans range. It is made from metal of course, but I added a plastic Power Sword from the Space Wolves Sprue. I also used a Deathwatch Shoulder Guard to link the Wolve's Sword with the model. So, this Power Weapon can be a gift of thanks or a memento from a fellow Space Wolf Bottle Brother who served with him at Deathwatch. 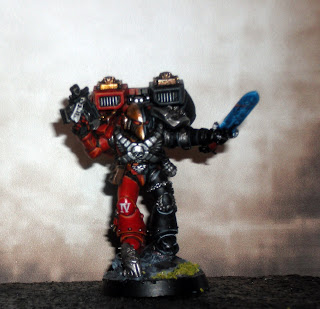 A picture of the power sword. 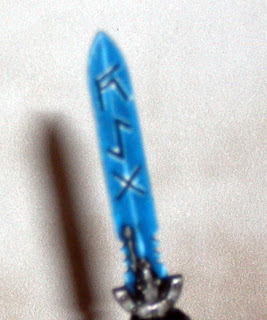 Looking at the Angels Sanguine force I have collected so far I can't help but notice that the Fast Attack Section of my collection is lacking, so I picked up a bike from my magic ''Failed Projects Box'' and painted one. I don't know why but i tried some things that are essential for other painters but for some reasons I never tried before. Decals for example and basing. I used the front armour of a Ravenwing Bike and the Power fist of an Assaut Marine Sprue and here it is. 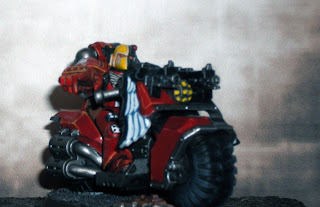 Here is another angle.Please note the decals and finaly some basing progress 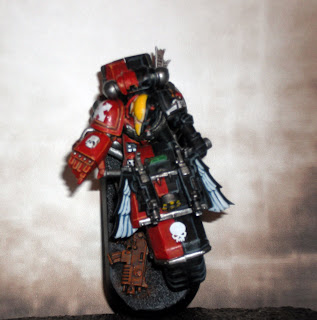 The Dark side of an Angel Sanguine 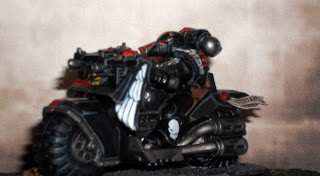 A WIP of the next Fast Attack model.As you see is a Vanguard Veteran.Please note that on this model the basing is better. 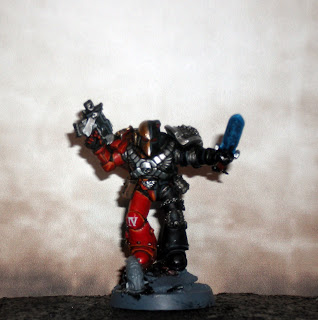 Thank you very much for watching.Please take care!
Posted by Kyr Gkikas at 20:31 1 comment:

A plasma cannon armed Astartes is the last update for the Angels Sanguine Tactical Squad.

No matter how many free toys you can take for the Tactical Squad (Multi Melta, Missile Launchers, Heavy Bolter) a plasma cannon is always able to scare every single opponent. You see, Plasma Cannon is a Heavy Infantry Slayer (AP2), it scares the crap out of Terminators and Power Armoured models, but it does not end here. The ''Feel no Pain'' special rule is something really common for the Blood Angel Brethren out there. Plasma cannon is here to solve these problems for just 10 points. If you ask me its an investment worth taking/painting. 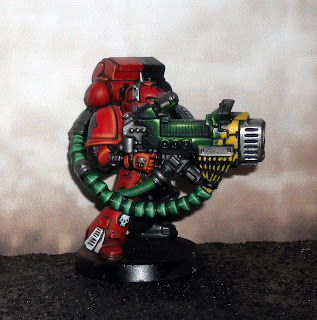 With the maximum range set on 36in Plasma Cannon is a medium range weapon. 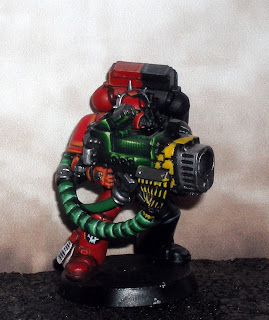 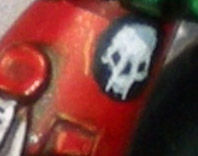 A Small detail.The skull inside a black dot is the insignia of the 1st Squad of every Blood Angel and Succesor chapter company.


Thanks for watching and take care of your selves out there!
Posted by Kyr Gkikas at 19:03 3 comments: